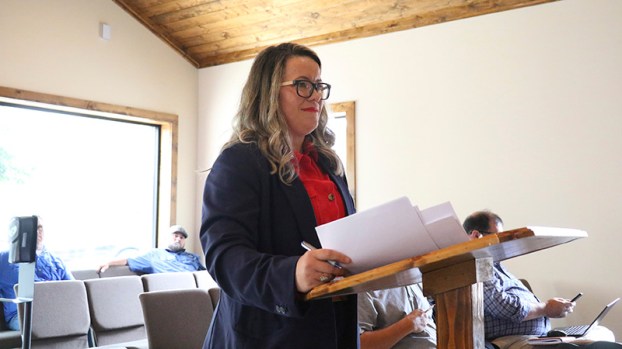 During Monday’s meeting of the Pearl River County Board of Supervisors, a request to have exclusive advertising rights in exchange for the use of a tractor during events at the County Fairgrounds was discussed, along with some other routine matters.

County Administrator Adrain Lumpkin said a tractor sales company, Mississippi Ag, is expected to occupy a location in Poplarville by early next year.

The company sells John Deere tractors and offered use of a tractor at the County Fairgrounds during events held that venue provided the county only allowed banner advertising from that company during events. Lumpkin brought the offer before the Board for discussion.

Several members of the Board, including Hudson Holliday and Jason Spence, thought the matter should be discussed in more detail and that county attorney Joe Montgomery look into the legality of the offer.

Holliday wanted to make it a situation where companies could bid on the offer, especially since Parish Tractor has been operating in Poplarville for years.

Montgomery felt that every company should have a shot at this opportunity to ensure that no one company gets exclusive access to the privilege.

No decision was made on the matter and the Board asked Lumpkin to look into it further.

Pearl River County’s Economic Development Director Lindsay Ward presented a payment of $22,839 to Power Dynamics as part of an ACE grant the company received for reimbursement in the company’s efforts to expand. Ward said that is the final payment for that grant. The Board approved that request.

Ward also presented the Board with the tax abatement policies currently being offered by the city of Picayune for the historic section of downtown and the industrial tax abatement program for the county attorney to review. No action was taken on those matters.

Lumpkin also updated the Board on how the federal funding the county recently received can be used. He said the final details are still being established, but so far his understanding is the money can be used to retroactively pay certain employees, especially those who directly dealt with the COVID-19 pandemic. Those employees may include nursing staff at the county jail, ambulance staff or even jailers. Pearl River County received a $5.3 million deposit in that funding recently, but was informed to hold on to the money until the details on how to spend it are established. Lumpkin said it appears comments on how that funding should be used are still being accepted until July.

Safety Director and Inventory Control Clerk Jerry Bounds updated the Board on an insurance claim filed for the fire that damaged the MSU Extension Service building back in April.

He said the square footage has been fixed to reflect the 13,000 square feet that was damaged, which should bring the claim from $900,000 to about $1.6 million. Also, a risk consultant will come to the county to conduct reassessments on all buildings owned by the county to ensure the insurance company has the correct square footage on all of the county’s inventory.

The next meeting of the Board will be June 16 at 9 a.m. in the Boardroom on West Pearl Street in Poplarville.