BATON ROUGE – Hannah Gusters, a McDonald’s All-America and the No. 2 rated center in high school basketball in 2020, has signed with the LSU women’s basketball program, head coach Kim Mulkey announced on Saturday.

Gusters, who transfers to LSU after spending one season at Baylor, will have four years of eligibility remaining and will be immediately eligible for the Tigers. In her one season at Baylor, the
6-foot-5 Gusters was part of a rotation at the post position that included two other All-Americans.

“This is a great opportunity to be part of Coach Mulkey’s first team at LSU and to do whatever I can to help bring our program back to the national spotlight,” Gusters said. “I trust Coach Mulkey and I know what she can do. She built the Baylor program from the ground up and I’m just excited to be part of what she’s going to do at LSU.”

In her one season with the Lady Bears, Gusters had six double-figure scoring games with a career-high of 22 points coming in a win over Northwestern State. She had a career-best 10 rebounds in a win over Kansas.

“As a McDonald’s All-American, Hannah was one of the top post players coming out of high school a year ago,” Mulkey said. “Tiger fans will love the immediate impact her skillset brings to our front court. Hannah made tremendous strides as a freshman and we look for her to continue that success in Baton Rouge!”

Gusters has been invited tryout of for the U.S. Basketball’s 2021 FIBA U19 World Cup Team in two weeks. Tryouts for the 12-player USA U19 team will be held May 14-16 in Denver with competition to take place in August.

A native of Dallas, Gusters prepped at MacArthur High School where she was ranked as the nation’s 16th-best prospect as a senior. She earned numerous high school All-America honors included being named to the prestigious McDonald’s All-America Team, the Naismith All-America Team and the Jordan Brand Classic All-America. As a senior, Gusters averaged 22.1 points and 10.3 rebounds and was named Miss Basketball for the state of Texas. 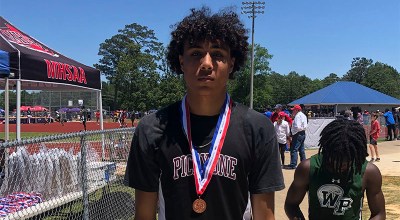