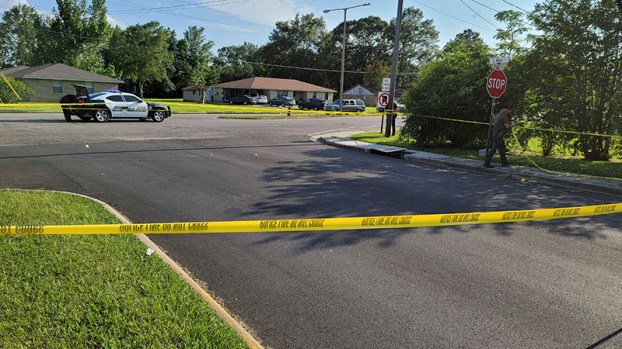 Det. Michael Hickey, at right, ropes off a section of South Main Street where shots were fired Sunday.

Picayune Police Department investigators worked two cases where shots were fired at other people on Sunday, but no major injuries were reported.

Both incidents took place Sunday, the first of which was called in just before 5 p.m. by the victim. Assistant Chief James Bolton said detectives were sent to Highland Community Hospital where the victim said the shooting occurred as he pulled up to the intersection of South Main Street and Bruce Street.

While stopped at that intersection, an unknown black vehicle pulled up beside the victim’s and an unknown Black male then pointed a pistol at the victim’s vehicle and opened fire. Bolton said the suspect fired between three to five rounds.

The victim then drove to a family member’s home in town on Fern Drive before being taken by private vehicle to the hospital. There, medical personnel evaluated the victim, who suffered a bruise on the side of his abdomen. Bolton said it appears as though the bullet did not penetrate the skin of the victim because it went through the car door, losing velocity.

No arrests have been made at press time, but the investigation is ongoing. Bolton asks anyone with information about this incident to contact Det. Michael Hickey at the Picayune Police Department at 601-798-4682.

The second incident took place that same night just after 11.

The victim in that incident called from the 1700 block of East Canal to say he had been shot at by a young woman who he offered a ride to. The man said the incident began after he picked up the girl, identified as Christine Cloud, 15, of 502 Sherd St., to give her a ride to a friend’s house. During the ride, the two engaged in a verbal altercation that led to Cloud asking to be let out of the vehicle. As the victim pulled over, and Cloud went to exit the vehicle, Cloud allegedly pulled a pistol and attempted to point it at the victim. Then the victim and suspect engaged in a physical altercation over possession of the weapon.

The victim was able to get Cloud out of his vehicle at which time he drove away. As the vehicle traveled down East Canal Street, she pulled the gun again and fired a shot into the direction of the victim, striking the rear windshield.

Due to the felony nature of the crime, Cloud was adjudicated and a warrant was issued to charge her as an adult with aggravated assault with a deadly weapon. Bolton said she turned herself in Monday and surrendered the weapon.