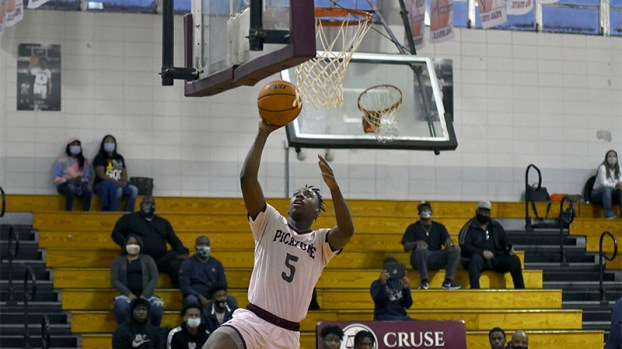 Late three propels Picayune hoops into next round of the playoffs

A back and forth playoff game Tuesday evening between the Picayune Maroon Tide and Wayne County War Eagles ended 55-52 in favor of Picayune thanks to a late three.

Both teams built sizable leads at different points in the game, but neither squad was going down without a fight as the clock started winding down.

Picayune had possession of the ball as the last seconds ticked away with the teams tied 52-52.

After a few quick firing passes, the ball found its way into Seth Stockstill’s hands who nailed a three point shot to give the Maroon Tide a 55-52 lead with just four seconds left in regulation.

Wayne County turned the ball over on its final possession as the buzzer sounded, securing a Picayune victory that will move the team on to the next round.

Stockstill led Picayune with 12 points, while Josh Holmes added 10 points and Damarius Magee came off the bench to contribute 11 points.

The win is part of a renaissance within the Maroon Tide program as Head Coach Eric Vianney has tried to instill a fearless mindset in his players this season.

Picayune came to play, and even after going down at certain points in the game, the Maroon Tide didn’t quit as the players’ self-belief never wavered.

“Now in the playoffs it’s win or go home and I’m proud of those guys, they found a way. I remember earlier in the season in these types of games we were struggling, and we probably lost this type of game (earlier in the season). We want to believe in ourselves, continue to get better and trust each other,” Vianey said.

Magee, and the second unit, was an integral part of the Maroon Tide’s success against Wayne County.

Not only did the offensive execution stay at a high level, but the athletes upped the intensity on the defensive end of the court, which led to several turnovers by the War Eagles.

“Our bench, with all those sophomores, in practice we’ve been trying to push them, show them the way and make them believe and challenge the first group for this type of opportunity. So when the time comes all they have to do is trust themselves and see where it’s going to go. At times we got down, but they just continued to work. I trust those guys because I know what they do in practice,” Vianney said.

As Picayune advances to the next round of the playoffs, the Maroon Tide will face the winner of a matchup between Forrest Hill and Laurel.

“When you’re trying to respect an opponent, sometimes it’s too much. ‘They need to run, they need to guard me too.’ And that mentality, that’s what we’re trying to cultivate. Whenever they step on the floor, it doesn’t matter who they play, you have to do your best and you can live with that and (against Wayne County) it worked out for us,” Vianney said.