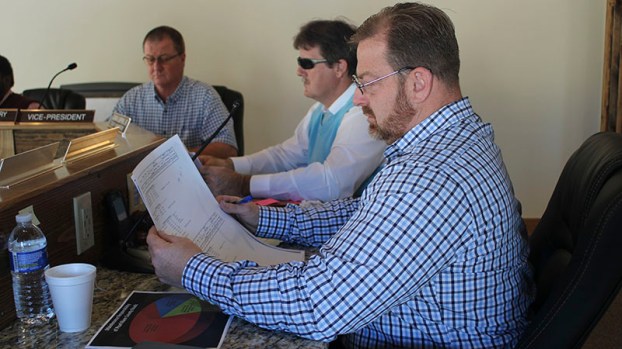 Board of Supervisors President Sandy Kane Smith reviews a sample cost estimate for repairing two county roads. The Board is considering a project to double the number of roads paved in the county.

The Pearl River County Board of Supervisors is developing a plan to dramatically increasing the number of roads paved in the county.

According to previous coverage, the Board has discussed doubling the miles of roads paved over the next 10 years and paying for that increased roadwork with a bond, funded by a millage increase.

On Wednesday, Board members discussed the fact that to be able to accomplish such an increase in the number of miles paved the county would need to contract out some of the work and hire additional personnel in the road department.

All five supervisors developed lists of roads in their districts that they believe need to be prioritized for repair.

Les Dungan with Dungan Engineering will review the lists and present the Board with a priority order for the roads on Monday, along with cost estimates for the roads.

The Board will use that information to determine proposed cost and scope for the project.

Dungan presented an analysis of two county roads, North Valley Road and Hershel Mitchell Road, as an example. Dungan presented the Board with both options to pave the roads in house, or contract the work out and explained that the cost between those options will vary depending on what shape the specific road is in.

The road department could add a three person grinding crew to both grind roads and perform base repairs, Dungan said.

Road Department Manager Charlie Schielder said the department could acquire a roller with the attachments needed for $113,000 to be used for base work. The department also needs to replace its 20-year-old distributor truck due to a hole in the tank. Schielder found a cost estimate for a new one totaling $181,000. He was directed to also look for used truck cost estimates.

The next Board meeting will be Monday, March 1 at 9 a.m.