Mixon arrested for theft of trailer, possession of counterfeit… 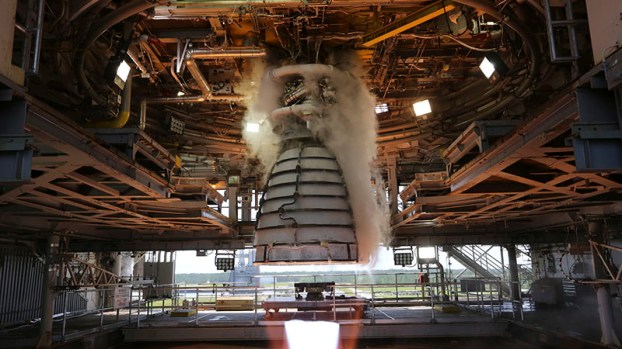 On Jan. 16, four of these RS-25 rocket engines will be tested at the same time at Stennis Space Center as part of NASA's effort to launch the Space Launch System. Photo submitted by NASA public relations

The Core Stage Green Run test series began in January of 2020 and includes eight tests meant to make sure the flight hardware is ready for lunar missions. This week’s test will be the eighth and final in the series.

Each test in the series has incrementally increased the components involved, from the computer system that functions as the brain of the avionics to the fuel system.

The SLS rocket is designed to fly humans and cargo to the moon in a single launch and is powered by four RS-25 engines. NASA plans to land the first woman and next man on the moon by 2024 as part of the Artemis program.

All four of the RS-25 engines for the SLS rocket will be fired simultaneously for eight minutes during the static hot fire test. Saturday will be the first time all four of the engines will be fired together. People that live as far as 60 miles away from Stennis will most likely hear the rumble and the ground will shake near Stennis, said McDaniel.

“There hasn’t been that much liquid propulsion energy in the world since the Apollo program, since the 70s, so it’s quite astounding,” said McDaniel.

During the shuttle program, only three RS-25 engines were used on the bottom of a space shuttle. The engines produce 1.6 million pounds of thrust and are fueled by liquid hydrogen and liquid oxygen.

As of Thursday, the test window was projected for between 2 p.m. and 6 p.m. on Saturday.

“I always caution people about that because the rocket tells us when it’s ready,” said McDaniel.

When all of the pressures, the temperatures and the flow of fuel come into alignment, that’s when NASA and Boeing will hit the start button, said McDaniel.

“These engines have flown on the shuttle missions before and successfully taken humans to the space station and to low Earth orbit,” he said.

The engines are the most complex system on the whole SLS rocket, he said, so using reliable proven engines is smart.

The four engines have been repurposed and modified for more power, less weight and faster avionics. New manufacturing processes like 3D printing have been used to reduce the weight of the engines while maintaining reliability. Those modifications added 30,000 to 40,000 pounds of thrust to the engines as compared to when they were used in the shuttle program, McDaniel said.

“About 70 percent of the employees that work on these engines live in Mississippi and the surrounding communities around Stennis, so there’s absolutely a lot of pride in that.”

The team that has worked on the test series includes a community of local residents and local employees with Boeing, NASA and Aerojet Rocketdyne from across the nation, said McDaniel.

The pandemic has meant that employees need to adhere to COVID-19 guidelines like wearing face masks and maintaining social distancing in cramped work areas while maintaining the attention to detail it takes to work on rockets, McDaniel said.

Eight or 10 hours after the test, Aerojet Rocketdyne employees will begin drying the rocket engines. Since the engines run on super cold liquid hydrogen and liquid oxygen, they exhaust a super heated steam. All of the engine components will be dried by pumping dry air into the engines.

During the test, data will be captured by thousands of sensors on the core stage and on the engines that will be put into graphs and control charts so engineers can ensure every valve opened and closed exactly as expected.

Within three days after the test, engineers will get to look at overviews of that data to make sure all of the test objectives were met. Then the core stage will be removed from the test stand and barged to Kennedy Space Center where it can be integrated with other components of the SLS, including the Orion Capsule and solid rocket boosters.

Toward the end of the year, the SLS rocket should launch uncrewed from Kennedy Space Center as a final demonstration that all systems of the rocket are working together. If that is successful, the next mission will include astronauts.

Like Mississippi, McDaniel has a connection to the history of space flight. He grew up in Huntsville, Alabama outside of Marshall Space Flight Center during the Apollo 17 mission.

“My dad was part of the NASA team that landed humans on the moon… So now, for me personally to be part of the next mission to put the first woman and the next man on the moon, I can’t express to you the excitement about it.”