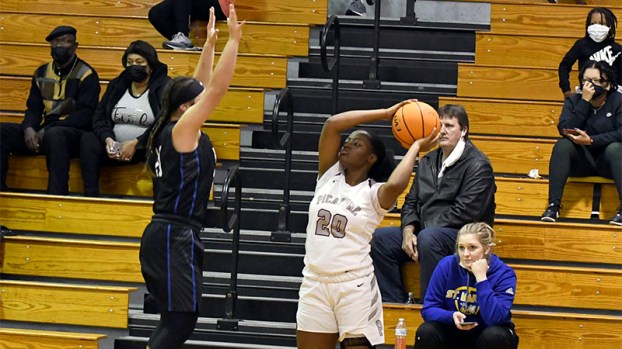 The Lady Blue Devils came away with a convincing win on Picayune’s home court with a final score of 50-19.

Emily Carroll was on fire for PRC, scoring 26 points while going 7-12 from deep.

The freshman has been inserted into the lineup after the team’s leading scorer Brennyn Dossett suffered an injury. Carroll was one of several young athletes who got minutes against Picayune as Head Coach Cliff Bauer rotated his players.

Bauer said getting the inexperienced players on the court in a hostile environment for a district game helps with their development and also keeps the athletes engaged.

“It definitely helps them to get in repetitions, but as much as I’m competitive I want the kids to have fun. By being able to play them, it’s beneficial and lets the kids have fun. That way they’re not just showing up to practice every day and then sitting on the bench,” Bauer said. The team’s next game will be against Hattiesburg on Jan. 15.

The Lady Tigers are an athletic team that plays aggressive defense. Bauer said it’ll be a good challenge for his freshman three point specialist Carroll to see how she handles the intensity.

“I want to see Emily Carroll, who has now stepped up into a major role, to shoot the ball with a little pressure. Hattiesburg will pressure her all night, so I’m curious to see how she does when they have athletes that get out and guard her,” Bauer said.

The game against Hattiesburg will start at 6 p.m.

The Maroon Tide came out on top against the Blue Devils and won 54-46.

Josh Holmes led Picayune’s scorers with 13 points, while Derai Jones added 12 and Seth Stockstill added 10. It was a hard fought, physical match up in front of a raucous Picayune crowd. PRC was 11-3 heading into the match up, so Picayune Head Coach Eric Vianney was happy to see his team gut out a win.

“It was not the best we wanted, but a win is a win and you take that, move on and maybe just look for areas to improve. Our execution was not necessarily the best, but I think those guys did what they could that night and they found a way to get a win,” Vianney said.

Having three players get into double digits was a boon for the Maroon Tide as the team was able to spread out the scoring and not rely on a single player.

That balance is something Vianney has been striving for all season and finding that sweet spot against a district rival helped Picayune earn the victory. “I always prefer teams where you have multiple people who can contribute. If everybody can handle themselves at that level every night, and not have just one guy pulling all the weight, then the guys find a way to play for each other,” Vianney said.

Fans made their presence known throughout the game.

Seniors like Stockstill and Jones had been in that environment before, so the preparation for the PRC match up was as much about the emotional aspects of the game as it was game planning for the Blue Devils.

“We try to get the kids ready mentally and emotionally for those games, to go out there enjoy themselves, play hard and try to get win. Playing at home is always fun, but you have to stay focused because there’s a job to do,” Vianney said.

The Maroon Tide will stay busy since the team has another district match up Friday, this time against the Long Beach Bearcats.