The fellowship of Christ’s religion 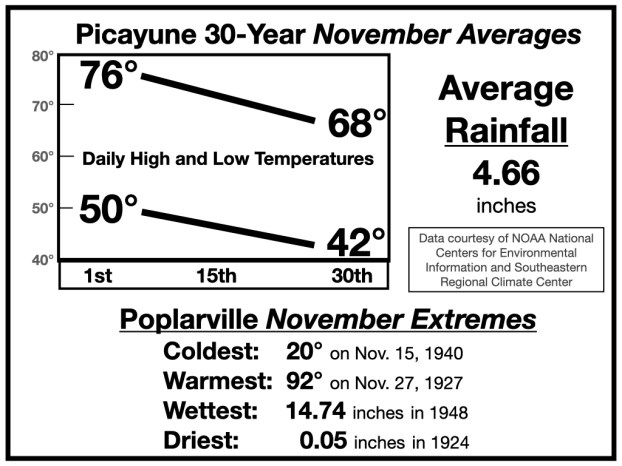 Our weather will be on the warm side of normal during most of the second week of November. If the temperatures aren’t enough to put you in a summery frame of mind, perhaps the presence of a tropical storm in the Gulf of Mexico will.

You may have thought, or at least hoped, that our visit from Hurricane Zeta on October 28th was the last we would hear of tropical cyclones in the Gulf of Mexico in 2020.

However, yet another tropical storm formed last weekend in the northwest Carribean Sea. The name should be easy to remember. Simply drop the “Z” from Zeta, and you have Eta (pronounced “EIGHT-uh”), the seventh letter of the Greek alphabet.

Eta intensified into a powerful Category 4 hurricane and slammed into Nicaragua and Honduras on Tuesday. Although the winds quickly weakened, the remaining tropical depression wandered sluggishly through those two Central American nations on Wednesday and Thursday producing widespread flooding.

On Friday Eta’s circulation emerged off the northern coast of Honduras, began restrengthening over the warm waters of the Carribean Sea, and headed toward Cuba. Once Eta nears Cuba, the National Hurricane Center (NHC) expects the storm to make a hard left turn and enter the southeastern Gulf of Mexico Sunday or Monday.Once in the Gulf, most of the computer modeling trends show Eta either dissipating or slowly meandering for a few days before moving back toward Florida. Keep up with the latest official forecast from NHC online at www.nhc.noaa.gov.

Thankfully, November is the last month of the Atlantic hurricane season. It also is the last month of fall. The graphic of climatological statistics included with this column illustrates the downward trend in temperatures as well as the wide range of possible weather in our county during the month.

With forecast lows in the 60s and highs approaching 80, the upcoming work week is shaping up to be warmer than the historical averages.

There will be scattered showers around this weekend, which will provide us with our first rain chances since Hurricane Zeta ten days ago. How much rain we get during the upcoming work week, if any, will depend on the future path of Tropical Storm Eta, or what’s left of it.