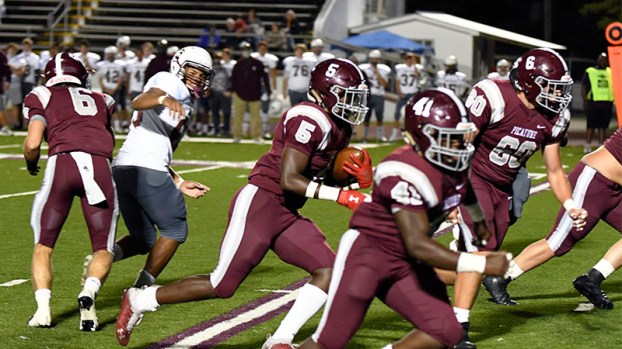 Long Beach started the game off with a bang as wide receiver D’lijah Robinson took the opening kickoff 80-yards to the house.

Kicker Mauricio Sandoval’s PAT was good, and Long Beach led Picayune 7-0 without the Bearcats’ offense even touching the ball.

Picayune answered with a score of their own after a 67-yard drive was capped off by a 9-yard touchdown run from running back Dorian Robinson.

Morgan Craft came on for the extra point and the attempt was good, tying the game at 7-7.

The Maroon Tide defense forced a quick three and out from the Bearcats, which gave the ball back to the offense.

Picayune then took 5:52 off the clock on a long scoring drive that finished with Robinson scoring again, this time on a 4-yard run.

Crafts’ extra point helped put the Maroon Tide up 14-7 with 8:45 left in the second quarter.

Under a minute later Long Beach took advantage of another big play to score.

Wide receiver Arnage Caston took a handoff up the middle and sprinted 55-yards into the end zone.

Sandoval came on for the extra point but the kick went wide,  allowing Picayune to keep a 14-13 lead.

That would be the last time Long Beach scored for the rest of the game.

On the next possession Picayune found pay dirt in just under three minutes as Robinson broke off a 31-yard touchdown run for his third score of the game.

Another extra point from Craft sailed through the uprights and Picayune took a 21-13 lead into halftime.

The Maroon Tide buckled down and cleaned things up in the second half as Picayune took control of the game.

Picayune got the ball to start the second half and quarterback Isaac Hickman used a quarterback sneak to score from 1-yard out for the Maroon Tide after a 74-yard drive.

Following the successful extra point, Picayune was up 28-13 with 9:40 left in the third quarter.

The Maroon Tide defense then forced a Bearcat punt, but the ball sailed over punter Junior Kozlowski’s head and was recovered at the Long Beach 19-yard line.

The ideal field position allowed running back Dante Dowdell to get in on the scoring action as he took the ball in from 9-yards out.

The PAT was good and Picauyne had a commanding 35-13 lead with six minutes remaining in the third quarter.

The two teams then traded possessions until the final score of the game, which came on a sweep that Maroon Tide full back Noah Carter took into the end zone from 5-yards out.

That score stayed the same until the final whistle was blown.

The win moved Picayune to 7-0 on the season. Head Coach Cody Stogner said his team did a better job of playing its brand of football as the game went on.

“They know they can do it, they just have to play Picayune football. It’s going to get harder the further we go, but I’m proud of the way they came out,” Stogner said.

Picayune is now 4-0 in district play and will face county rivals Pearl River Central next Friday night in Carriere.