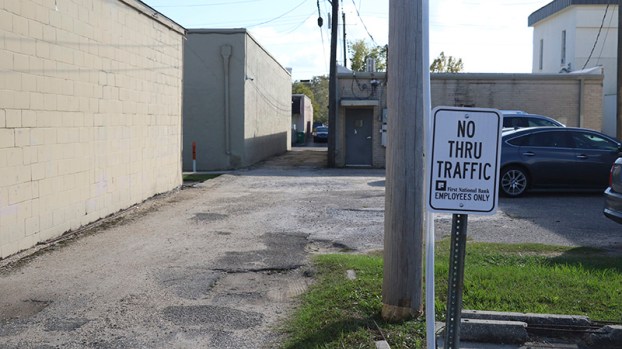 This alley between the two buildings occupied by the main branch of First National Bank in Picayune is on the agenda for revitalization. Photo by Jeremy Pittari

Grant funding and donations are being sought in an effort to revitalize two alleys within the city of Picayune.

During Tuesday’s meeting, the City Council discussed the need to perform work to two alleys on East Canal, which are located between the First National Bank buildings and directly across the street. Grant Administrator Christy Goss said there are grant opportunities available to put the project together. Additionally, some private entities have indicated they would be willing to donate to the project, said Public Works Director Eric Morris.

The goal is to raise 100 percent of the funding needed to complete the project.

The Council approved a motion to seek out that funding.

A drainage easement was also discussed by the Council. Morris said the drainage feature is located near Tung Tree Drive and was constructed possibly in the 1940s. Currently any time that feature needs maintenance, the city has to request a temporary easement. To prevent that need in the future, the property owner has offered up a portion of their property so city employees can maintain it without having to ask for permission from the landowner. The Council approved a motion to accept the easement.

It was also announced during Tuesday’s meeting that Deputy Fire Chief Barry Lee will be retiring from the Picayune Fire Department on Oct. 31 after 23 years of service. Fire Chief Keith Brown said that Lee asked that no party be thrown and Lee’s plans after retirement will include a lot of fishing.  The Council approved a motion to sell Lee his fire helmet and badge at a cost of $1.