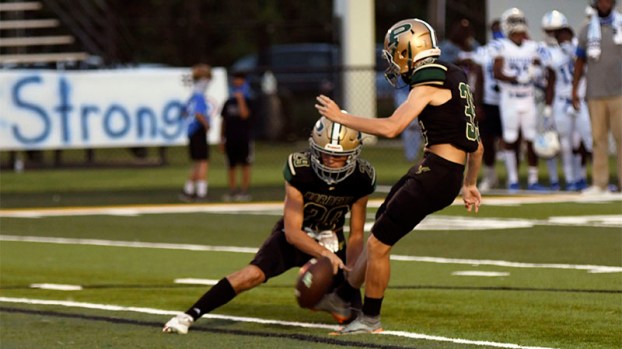 The Poplarville Hornets are coming off a tough 21-14 loss to the D’Iberville Warriors last week and now must shift their focus to this week’s opponent, the Picayune Maroon Tide.

Head Coach Jay Beech said his team made too many mistakes last week that ended up costing Poplarville the game.

Fundamentals were hindrances for the Hornets against D’Iberville, and they’ll look to remedy those issues this week in practice.

“Pre-snap penalties and turning the ball over at the end of the game (cost us),” Beech said.

The loss dropped Poplarville to 0-2 on the season, but because all of these matchups are before district play they don’t have an impact on the Hornets’ ability to make it into the playoffs.

Instead these non-division games serve as a testing bed for Beech and his staff as the offense looks to educate the young starters, while the defense adapts to a brand new system.

The landfall of Hurricane Sally and the subsequent storms will force the Hornets to lose out on practice time this week, but that doesn’t mean the program is looking for excuses.

Beech said his team is ready to get to work and they’ll do their best to put a game plan in place that’ll lead to a victory over the Maroon Tide.

“We’ll just try to narrow down what we’re focused on. We’re focused on doing a good job blocking and tackling. Each player gets graded every week and there are going to be things every player can focus on this week to get better at, and that’s all we need to be thinking about,” Beech said.

The matchup against Picayune will be an away game for Poplarville.

The contest is scheduled to start at 7 p.m.