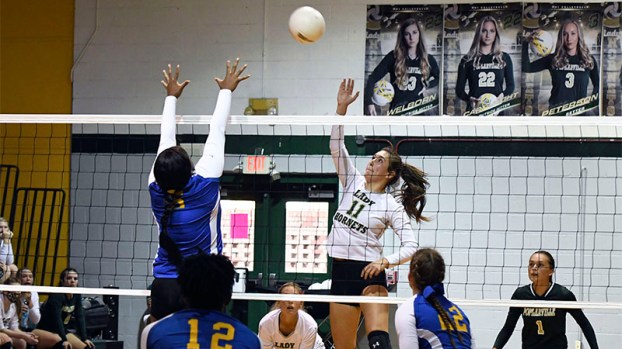 Hitter: Senior Kat Adcox goes up for a spike during a recent Poplarville volleyball game. Photo by Jonathan Mitchell.

The Poplarville Lady Hornets played their first district game of the season last Thursday night against the Greene County Lady Wildcats and won in four sets 25-14, 25-21, 17-25, 25-20.

The win moved Poplarville to 4-2 overall on the season, and 1-0 in district play.

Greene County ended last year second in the district, which meant the Lady Hornets’ fast start to the game was helpful in securing the win.

“We started that whole match by really playing at the top of our game. We didn’t start out slow. I felt like we came out awake and we just maintained that. The girls did exceptionally well,” Head Coach Robin Jeffries said.

Poplarville’s offense seems to be consistently improving this season, a trend that continued against the Lady Wildcats.

The athletes were able to take advantage of Greene County’s defensive weaknesses en route to the comfortable win.

“We were patient. We took our time with setting and created a few more hits, and I think that was something that we did better and to our advantage,” Jeffries said.

Defensively, the Lady Hornet athletes were able to use length and athleticism to shut down the Lady Wildcats offense.

“We had some awesome blocks on the net. Greene County hit the ball well, but our timing was good,” Jeffries said.

Jeffries said that during previous games her team matched the opponent’s level of play.

If it was a good team the Lady Hornets would play up to their potential.

However, if it was a team the Lady Hornets should beat, the team played down to their opponent’s potential.

Consistency is key and it’s something the squad is still searching for as Poplarville moves deeper into district play.

“I just want us to stay consistent and play what we play, no matter who the opposing team is. We need to keep our style of play and momentum,” Jeffries said.

Perseverance has been a common theme for the Lady Hornets as they compete amidst a pandemic, and now with inclement weather incoming the team will miss out on precious practice time. However, even with all these obstacles, Jeffries said her team has proven to be resilient and adapts easily.

“We’ve really hit a lot of bumps in the road, but we’ve persevered through all of that. They’re playing with all of this like it’s normal even when it’s not,” Jeffries said.

Poplarville’s hot start to the season boils down not only to talent and game planning, but also to the enthusiastic nature of the players.

Jeffries said her athletes have been excited to step on the court whenever they can, and that excitement has translated to wins for the Lady Hornets this season.

Poplarville’s next matchup will be an away game against the Purvis Lady Tornadoes on Sept. 17 with a starting time of 6 p.m.