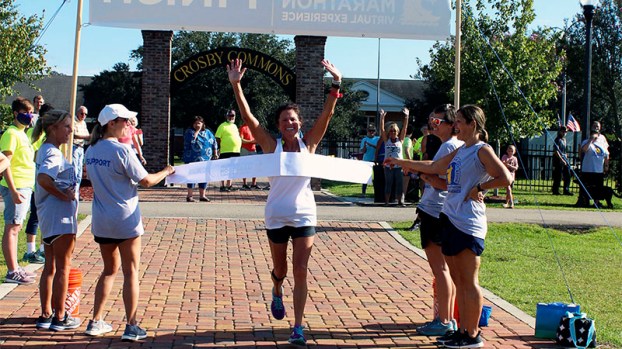 Hometown Support: Barbara Sheffield crosses the finish line after completing the first ever virtual Boston Marathon with supporters cheering her on.

Barbara Sheffield made history last Saturday morning when she took part in the first ever virtual Boston Marathon.

Sheffield qualified for the 2020 Boston Marathon in 2019, but because of COVID-19 the race was rescheduled multiple times before eventually taking the virtual route.

Sheffield planned out her course around the city of Picayune and ended up finishing the race in 4 hours and 16 minutes.

Sheffield said the southern Mississippi weather ended up affecting her as she ran the streets of Picayune instead of metropolitan Boston.

“It was very hot and humid even though we’ve been training in this. The later it got the hotter it got, so it did have an impact on my time for sure,” Sheffield said.

The race began at 5 a.m. and Sheffield said there were supporters out cheering her on, even at the starting line.

The Picayune Memorial High School robotics team manned water stations while the Maroon Tide cross country team displayed signs they made to encourage Sheffield as she embarked on her third marathon journey.

The hometown support and familiar faces of those cheering her on helped Sheffield enjoy the race more than she ever expected.

“It was better than Boston. When you have coworkers handing out water and you have friends and family riding by cheering you on. I wouldn’t have had that in Boston. When I came in it was great because I had all kinds of supporters,” Sheffield said.

Now that she’s conquered her third marathon, Sheffield is looking for another challenge, and the Louisiana Marathon in January of 2021 is what she’s set her sights on.

“At one point I thought I would just do half marathons, but I’m ready to tackle another one. If I can run (the Boston Marathon) in this heat and humidity I’ll do great in January,” Sheffield said.

Sheffield said she loves the challenge of marathons, that’s why she’s looking to take part in another long distance run.

The support from the community meant a lot and now she’s hoping to build off of Saturday’s race and continue running as she seeks new and exciting challenges.

“It’s a build up and I kind of think it’s like Christmas. There’s a big build up, but it’s over now.”

“I trained for a marathon and ran it, now I have to find another one to do,” Sheffield said.