Local baseball programs preparing for the start of school 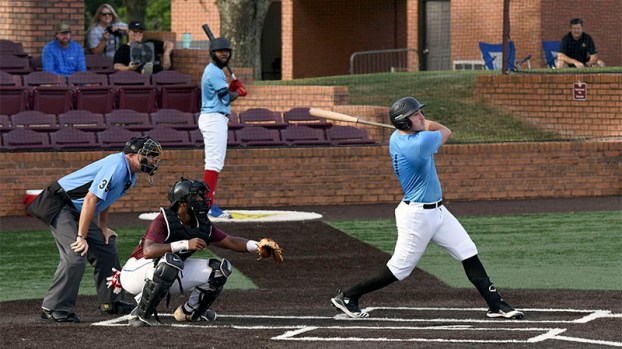 All In The Swing: Austen Izzio looks to see where his hit will land after making contact on a pitch during a Southeast Collegiate League game. Photo by Jonathan Mitchell.

The Southeast Collegiate League had its final game of the summer Thursday evening as the Royals took on the White Sox.

The White Sox started the scoring early, getting a run on the board in the second and fourth innings to take a 2-0 lead.

The Royals responded with a run of their own in the top of fifth, but the White Sox scored again in the bottom of the sixth inning to maintain the two run advantage. Both teams scored in the seventh inning with the score now 4-2 in favor of the White Sox as only two innings remained.

Then, in the top of the eighth inning, the Royals tied the game by scoring twice to make it 4-4.

It would come down to the final inning of the match up to determine a winner.

The Royals were able to put one run on the board in the top of the ninth to take their first lead of the game 5-4.

However, the White Sox responded with a four run outburst in the bottom of the ninth and won the game on a walk off three run homer from Brady Wilson.

Two former Pearl River Central Blue Devils were part of the Royals squad whose season ended with the tough loss.

Hayden Dunhurst split time at second base and as catcher for the Royals while going 0-3 at the plate with a walk, strikeout and run scored.

Austen Izzio played shortstop for the Royals against the White Sox, and was efficient at the plate going 1-3 with a double, RBI and run scored.

Bob Dunhurst is the head coach of the Royals and said the summer games, even the ones lost to a walk off home run, serve as learning experiences for the players. It’s important for baseball players to be able to move on quickly from mistakes, whether it be at the plate, on the mound, or out in the field.

Either way, the SECL gave athletes the chance to work on that aspect of their game after having spent months off of the field.

“Even when you do everything right you sometimes don’t get results. The only thing you want the past for is for knowledge and learning. The worst thing to do is to just sit there and think about it. You’re going to have good and bad days, you just have to take both of them and move on,” Bob Dunhurst said.

Now that the league has finished its season, players will have a short period of time off before returning to their college programs for fall workouts.