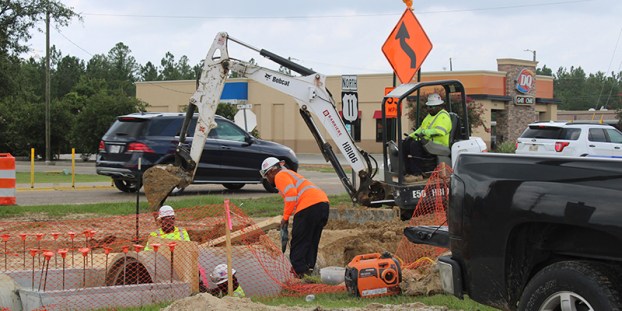 Phase II of the Highway 11 expansion project is tentatively set to start at the beginning of November.

Barriere Construction has a $14.4 million contract to widen Highway 11 to four lanes and the expansion is projected to take three years to complete. A second phase of the overall project is planned, which will include replacing the bridge over the East Hobolochitto Creek. That work will be under a separate contract.

The rainy weather in June made for a slow month of work, said Childs, but the contractor was still able to start on sidewalks and concrete driveways south of Highway 43. In late June and early July sidewalks were laid from Cayten Street to East Sycamore Road.

Base work south of Highway 43 has also been completed on the east side of Highway 11 and some base work has been finished north of Highland Community Hospital.

The contractor has begun the drainage runon between Highway 43 and Highland Community Hospital and continued drainage work from the area of the hospital to Lakeshore Drive.