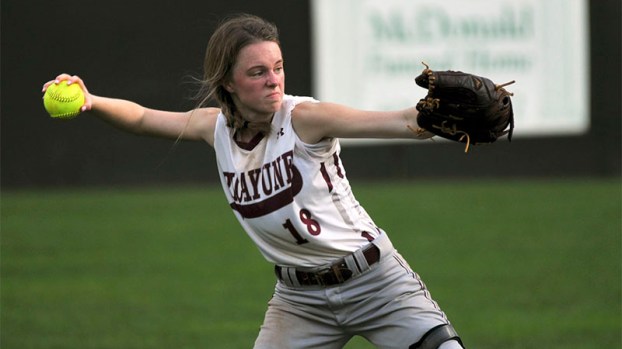 Moving On: Right fielder Mary Beth Dowling looks to throw to first base after fielding a grounder. Dowling graduated this past year so her role will have to be filled. Photo by Jonathan Mitchell.

Picayune softball ready to get back to work

The Picayune Lady Maroon Tide softball team will be resuming practices July 6 after having a delayed restart due to a change in head coaches.

Courtney Dickens will be taking helm of the program as former head coach Kristi Mitchell assumed the role of principal at Picayune Memorial High School.

A meeting was held with players Thursday to explain what guidelines would have to be followed when practices resume, and so the athletes could fill out the necessary paperwork in order to participate in athletic activities.

When practices start, the emphasis will be on individual drills.

Players will be split into infielders and outfielders, then will be divided even further to work on position specific skills.

Fundamentals will be the main focus for Dickens and her players, with scrimmages being a possibility later on.

Dickens said a major portion of the fundamentals will focus on improving at the plate and making the players more dangerous offensively.

“I would like to focus more on our hitting. I feel like that’s been our weak point the past couple of years and I would love for us to be a better hitting team,” Dickens said.

The team won’t have tryouts until late October or early November, so the practices will be for returning players only.

The summer months will be used for personal development and helping the athletes grow into their roles.

“I always like to start out with individual stuff because once you get into the season you start to get away from doing that and do more team stuff,” Dickens said.

While this will be Dickens’ first year as the head coach, she’s been involved in the program for years as both a player and assistant coach.

That familiarity will help the transition, especially since the athletes already have enough on their plates dealing with the strange circumstances of playing during a pandemic.

Having a person they know in charge is one less worry for the athletes as they return to the field, so Dickens is hoping the players adjust quickly once the team gets back to work.

“They know what I expect and that’ll carry over to taking over as head coach of the high school (team). It’s good for them because it’ll be an easy transition. There may be a couple things that are different, but for the most part (not really),” Dickens said.

Normally the team would’ve been practicing during the month of June and get July off, but because the team is just now practicing again Dickens said the plan is to continue practices through the rest of this month. How the fall will play out is still up in the air as districts formulate plans to restart school.

Board of Aldermen adjust budget to fund building repairs, take no action on TIF bond

PRC school board delays start of school for students