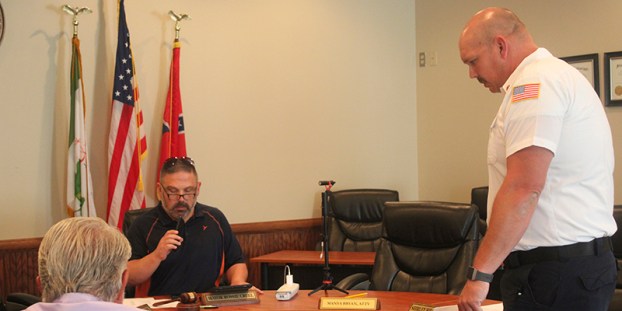 From left, Poplarville Mayor Rossie Creel and Fire Chief Jason Bannister discuss the purchase of a 2000 model year fire truck for $26,000, which is a considerable savings considering similar trucks up to $125,000. Photo by Cathy Cook

Poplarville’s Board of Aldermen approved the purchase of a fire truck for $26,000 from the Pearl Fire Department.

Mayor Rossie Creel called a special meeting to be held on Tuesday to listen to a presentation from Fire Chief Jason Bannister on the potential purchase.

The used 2000 model E1 custom pumper came with $19,000 worth of additional equipment, said Bannister. Bannister said he found two quotes for the same style of truck and model year for $82,000 and $125,000, and felt the truck would offer the department significant savings.

The Board had to amend the budget to make the purchase and pull from the city’s cash reserves, said City Clerk Jane O’Neal.

The Pearl Fire Department is helping out the Poplarville Fire Department tremendously by selling the truck for such a low price, Bannister said. It was urgent to make a decision on the purchase quickly so the Pearl Department would know whether they should seek other buyers, said Bannister.

The start of the meeting was delayed because the Board had trouble getting three members in attendance for a quorum. Board member Tony Smith was present, Board member Russell Miller attended via conference call, but Mayor Rossie Creel had trouble finding a third Board member who could participate in the meeting, either in person or via phone. He finally called Alderwoman Shirley Wiltshire and asked her to attend via conference call even though she was traveling in Georgia and concerned about the call dropping.

Wiltshire said she was having trouble hearing and paying attention to the information Bannister shared as she was trying to drive. Wiltshire also said she had not had time to review the information about the fire truck as she was traveling. Despite her concerns, the meeting continued and the Mayor called a vote on the issue. The Board approved the purchase in a two to one vote. Wiltshire voted against the purchase.