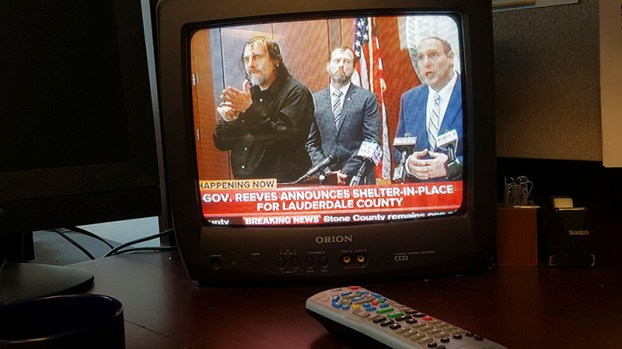 ADDRESSING THE PUBLIC: At right, Dr. Paul Byers, state epidemiologist with the Mississippi State Department of Health, provides details of the ongoing COVID-19 pandemic in the state. During that briefing, a shelter in place order for Lauderdale County was issued. Photo by Jeremy Pittari

Mississippi Governor Tate Reeves issued what he called the first of what could be more shelter in place orders for counties.
That shelter in place order pertains to residents in Lauderdale County, including those living within that county’s municipalities, he said.
During his address to state residents, Reeves elaborated that the shelter in place order was issued for Lauderdale County as opposed to others with higher cases of COVID-19 because of the significant increase in cases.
Dr. Paul Byers, state epidemiologist with the Mississippi State Department of Health, said that Lauderdale County was chosen because his office has seen a rapid increase in the number of cases in the last 48 to 72 hours. He specifically noted a number of cases occurring in a nursing home in that county, which he declined to name to protect the identity of the residents there. Byers did go on to say that all staff, residents and families of the nursing home residents have been alerted.
As of 6 p.m. Monday, the MSDH website reported that there are 937 cases if the virus in this state, of which 20 deaths have occurred. Pearl River County now has 30 cases, while Lauderdale has 35. Neither county has reported a death due to COVID-19.
During the press conference held Tuesday morning, Reeves was asked why other counties, such as Pearl River, were not considered for a shelter in place order since they too have a high number of cases compared to other counties.
Reeves said Pearl River County was discussed in his office when considering the order, but he went on to add that Pearl River County’s numbers seem high due to testing in larger quantities earlier in the pandemic and also attributed the county’s proximity to New Orleans. Pearl River County was one of the first counties to identify a case in this state, Byers added. Byers said that Lauderdale was chosen due to the rapid increase of cases in such a short period of time.
Reeves went on to say that he expects to issue additional shelter in place orders as they become necessary when data indicates large spikes in cases.
Mississippi’s governor went on to caution people in Lauderdale County against panic buying. Just because he issued a shelter in place order, does not mean essential personnel will not still report to work. He said that grocery stores will still be operational and the shelves will be stocked regularly.