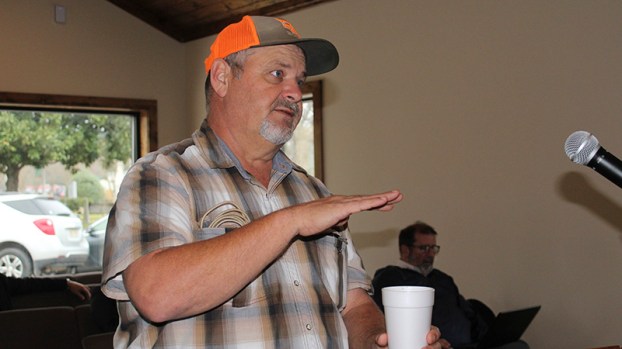 Construction project manager Derek Perry speaks with the Board of Supervisors about the options for replacing furniture in the new County Courthouse Annex building. The desks and cabinets in the Chancery Clerk’s new department space were ill suited to the department’s work, said Chancery Clerk Melinda Bowman.

New office furniture for the Chancery Clerk’s offices in the County Courthouse Annex will have to be replaced before it sees use, because the furniture is ill suited to department’s needs. It remains unclear if the county or the architecture firm will pay for the fix.

The Pearl River County Board of Supervisors approved a proposal at a special Board meeting Thursday to remove and replace cabinets and desks in the Courthouse Annex.

The cabinets and desks are located in what will be the Chancery Clerk’s new offices. Removing and replacing the already installed and custom built desks and cabinets is estimated to cost $57,164, said construction project manager Derek Perry.

At the Board’s request, Chancery Clerk Melinda Bowman looked at options for purchasing new office furniture to replace the cabinets and desks, she said. However, the expense for purchasing replacement furniture would be comparable to rebuilding custom furniture, Perry said. It’s possible contractors can reuse the existing furniture in Bowman’s office in another area of the building, but not all of it.

Bowman expressed concerns to the Board about the furniture in her new office space at their meeting on Nov. 4, according to previous coverage. Bowman said the height of the desks and the office’s layout is significantly different from the requests she made to the architect involved in the project and as such the current layout is ill suited to her staff’s needs, according to previous coverage.

The desktops are 34 inches high, which is four inches taller than regular desks, and lack file drawers to hold court and land documents that the office handles daily, Bowman said at the Nov. 4 meeting. At the November meeting, Bowman said she was concerned that the desks did not have enough space for her staff’s electronic equipment, like scanners and desktop computers. She also expressed concern that the taller desks would pose a problem for employees with back problems.

Bowman said she was informed early in the construction design process that department heads would have a say in the design of their respective departments, but she never saw the final plans and wanted to know who approved them.

At that meeting, the Board did not address Bowman’s question, but county attorney Joe Montgomery said the contract would determine if the architecture firm or the county would be responsible for the cost of removing and replacing the desks and cabinets.

At Thursday’s meeting, District II Supervisor Malcolm Perry said whether the county or the architecture firm will pay the cost of removing and replacing the already installed office furniture is something the Board can examine before the project is completed.