Suspect arrested after being caught by security system in… 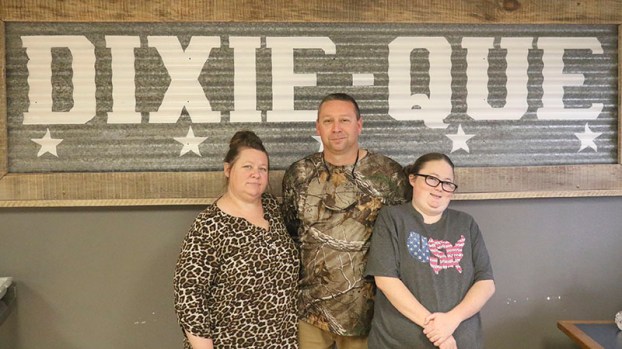 HOBBY TURNED PASSION: Chris Durapau, center, turned his love of barbecue into a food truck and then a brick and mortar business over the past five years. He is pictured with, from left, Rita and Brooke Durapau. Photo by Jeremy Pittari

For the past 25 years, Chris Durapau has been cooking and smoking meats as a hobby, but about seven months ago that hobby turned into a full fledged business venture, Dixie Que BBQ.
Over that quarter of a century, he catered parties by cooking barbecue for friends, family and his fellow congregation.
In 2014, that interest in cooking brought him to barbecue competitions, where he said he learned a lot about cooking meat.
Then in 2015, he rented a lot in the Nicholson area to park his food truck and sell his barbecue to the locals and employees of Stennis Space Center on Fridays for about four hours, or until he sold out of food. Most of the time, he would be sold out in two hours, Durapau said.
Then, he was convinced by a friend that a brick and mortar location would be the next step. In May of this year, he opened up at 3036 Highway 43 N., Suite A, and he says business has been good.
He still caters, but now it’s for local businesses, schools and hospitals.
While at the competitions, he also noticed that nachos with barbecued or smoked meat can be a popular item, a dish that has found a place on his regular menu at Dixie Que BBQ. A quick look at the menu shows Durapau knows variety sells. One of his most popular dishes is the Hog Fry, an item people from out of town still come for which includes French fries, nacho cheese, jalapenos, coleslaw, baked beans, BBQ sauce and pulled pork.
Even though Dixie Que BBQ is only open three days a week, he said he still sells out of the most popular items, and there are some items his regular customers order from his food truck days that are not listed on the current menu. On average, he said he sells 500 tacos in a weekend, a dish prepared with the same tortillas used by Mexican restaurants.
The inspirations for those unique dishes came from various places, such as competitions, fairs and festivals where he’s set up his food truck.
Even though he said his menu is not what is traditionally seen in a barbecue restaurant, he still prepares the meats in a traditional barbecue method by utilizing that cooking style’s times and temperatures for each cut of meat.
Family is important to Durapau, so much so that not only can they be seen working behind the counter, the business is named after one of his grandchildren.
Dixie Que BBQ is open on Thursday and Friday from 10:30 a.m. to 7 p.m. and on Saturday from 10:30 a.m. to 2:30 p.m. Staff can be reached by calling 601-347-7432. He said he is only open three days a week because he still has a construction business that he started before Dixie Que BBQ.
Each Thursday he offers a special, and on Saturdays customers can order the brisket hamburger. Each Saturday he gives each customer a ticket that is entered into a drawing for a free T-shirt.