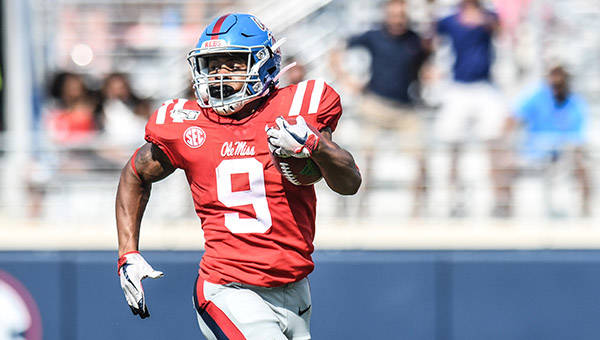 OXFORD (AP) — Ole Miss running back Jerrion Ealy flashes a grin when he’s asked about how often defenders catch him from behind.

“Never happened,” Ealy replied when asked after the Rebels’ 40-29 victory over Southeastern Louisiana. Then the freshman knocked on the wooden panel in front of him.

Ealy isn’t short on confidence, and he has the ability to back up that self-assuredness. Ealy set an Ole Miss freshman single-game record with 273 all-purpose yards against Southeastern Louisiana.

That performance gives the five-star recruit plenty of momentum heading into Saturday’s home game against No. 23 California.

Ealy rushed for 101 yards on just nine carries against Southeastern Louisiana. He also scored on a 94-yard kickoff return.

“I knew if I got through their first line, there would be no one else,” Ealy said. “Once I got past the first line, I broke it off to the left and the rest is history.”

His 273 all-purpose yards broke Dexter McCluster’s single-game freshman record. Ealy also put together a two-play, 82-yard scoring drive by himself in the second quarter. He broke runs of 52 and 30 yards on his way to the end zone, cementing the first multi-touchdown game of his career.

Ealy is part of a diverse Ole Miss rushing attack that also includes senior Scottie Philips and freshman Snoop Conner. Phillips receives the bulk of the carries and has rushed for over 100 yards in each of Ole Miss’ last two games. Ealy and Conner each had nine rushes against Southeastern Louisiana.

Phillips “is in good enough shape to carry it 20 or 30 times,” offensive coordinator Rich Rodriguez said. “The biggest thing for us is to make sure Ealy and Snoop get the carries as well. We have to be conscious of that. Scottie is the veteran and he is playing good football for us.”

Ole Miss can wear teams down late with fresh backs. Eight of Conner’s nine carries came on the team’s final drive that salted the game away.

The Rebels’ chances of winning Saturday depend on whether they can solve a Cal defense that has held each of its last 10 opponents below 24 points.

Ealy’s emergence only enhances Ole Miss’ depth. He is a threat in the passing game, both out of the backfield and in the slot.

“He can run, catch and really do it all,” quarterback Matt Corral said. “I am not surprised though. That is expected from him.”

Ealy is only three games into his collegiate career and feels as if the game is coming more naturally by each carry as he adjusts to the speed of Southeastern Conference play.

As his confidence keeps growing, his production likely will as well.

“First game for me was a lot faster than I expected it to be,” Ealy said. “By game two, it was slowing down a little bit, and then I was able to hit the holes faster and see things I hadn’t seen. Now at game three, it’s all starting to click.”