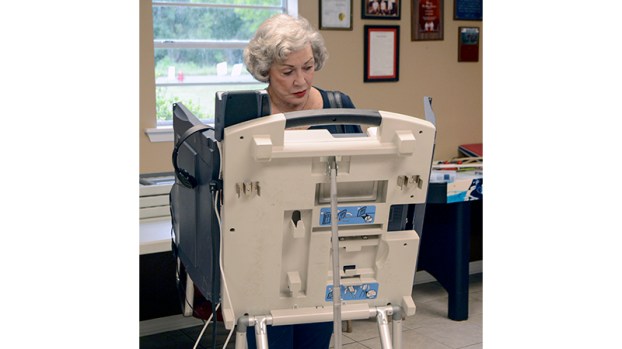 A majority of District 108 voters, primarily in the south end of the county, voted for Stacey Wilkes to fill the seat vacated by Mark Formby. Photo by Julia Arenstam

Stacey Hobgood Wilkes has been elected the next Mississippi representative for District 108 according to unofficial results of Tuesday’s special election.
Qualified candidates included Jerry W. Frazier, Tavish Cordero Kelly and Wilkes, who campaigned for several weeks to win the most votes of the residents of Mississippi House of Representatives District 108 within Pearl River County.
Despite the rain, about 14 percent of registered voters headed to the polls Tuesday, electing Wilkes as their next representative in Jackson, according to unofficial results from the Pearl River County Circuit Clerk’s office.
According to initial counts, not including affidavit and absentee ballots, Wilkes received 1,375 votes, followed by Kelly who received 812 votes and Frazier who received 531 votes.
Once results are official, Wilkes will fill the position and begin serving during the 2018 legislative session, which begins in January.
32 affidavit ballots remain to be counted.
Mark Formby vacated the seat earlier this year to accept an appointment by Mississippi Governor Phil Bryant to the Mississippi Workers Compensation Commission.
Formby represented District 108 for nearly 25 years, previous coverage states.